Magic words. It's supposed to feel good writing them on your novel. I was anticipating the end of my novel Alma so much that I even wrote THE END on a post-it and tacked it up over my desk, to remind me of my goal. Just make it to the end, that's all. It doesn't have to be good, you just have to make it to the end. This has been my mantra. Just finish already. I'm even visualizing it, like those dang The Secret people suggest.

I should have felt elated, but instead I'm left with melancholy. Maybe because that's the tone this novel ends on, melancholy. The characters don't fix all their problems. They even get new ones. It's a sad feeling. Maybe the right one.

Time to read and reread now. But I might stick it in the drawer for awhile first.

Please let me know if you're interested in reading a draft. Last time I printed and bound a bunch of copies and passed them out. The feedback I got was invaluable (thanks guys!). I'm particularly interested in your reaction if you have intimate knowledge of any of the following subcultures:

No pressure. And one need not know any of this crap. To me, the most helpful feedback is, "during this part of the book, I was feeling _____." Seriously.

Anne Elliott is a writer, ukulelist, and feral cat caretaker living in Brooklyn. Her fiction can be seen in Hobart, Pindeldyboz, Smokelong Quarterly, FRiGG, and others. She blogs on felines and fiction at http://assbackwords.blogspot.com

Angela Himsel has been obsessed with God for a long while, and she'd like to think that God is equally obsessed with her -- and with the rest of us. In her novel, God on the Couch, God takes to the couch in an attempt to understand the Creator/creation relationship. Angela's writing has appeared in the New York Times, the Jewish Week, the Forward, Lilith, online at beliefnet.com and elsewhere.

Best known as the tallest third of the pop rock band, BETTY, Alyson Palmer also writes. BETTY has performed in venues all over the world since 1986 and is known to television audiences through their recognizable theme songs for Showtime’s "The L Word," HBO's "Encyclopedia", "Cover Shot" on TLC, Comedy Central's "Out On The Edge" and Discovery TV's "Ms. Adventure". Alyson has appeared on "The L Word" and "Who Wants To Be A Millionaire.". She writes and performs original songs with long-time-love Tony Salvatore in Tony & Alyson and Tot Rock in the raucous Tone Alley. She blogs at www.mamarox.com

Drunken! Careening! Writers! is a reading series dedicated to the proposition that readings should be: excellent, well-read pieces that have at least one thing in them that makes people laugh (nervous laughter counts), and don't run more than 15 minutes each. For more information, or to be added to the mailing list, email CareeningWriters@aol.com.
Posted by Anne Elliott at 12:12 PM 1 comment:

Email ThisBlogThis!Share to TwitterShare to FacebookShare to Pinterest
Labels: readings

Guest Blogger Angus Barr on Stockholm Syndrome, Missing Cojones, and a Cat's Right to Be Chosen For 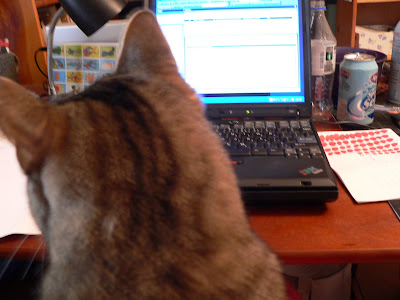 Hi, you may know me, I'm Angus Barr, brother of the famous Vince. I live with Anne and everyone else inside the house, which wasn't always the case for me. I used to be a shy feral cat, a few years ago, sleeping under the hosta in the front yard. But then I got a really bad abscess on my belly, and it slowed me down. Next thing you know, they're taking me away in the car, I'm put into a mysterious sleep, and when I wake up, I've lost my balls, have a plastic drain in my belly, and I live indoors. The crazy thing is, I like it, even after my belly healed. There's nothing like a warm lap. Plus, sometimes I get to surf the web with Anne. She moves the cursor around for me to chase.

As you know, two new homeless cats showed up on the back porch recently. My human benefactors took it upon themselves to cage them for a week, and take them away for a day to a mobile clinic. When they came back they were missing the top of their left ears. Oh, and all their sexual glands. 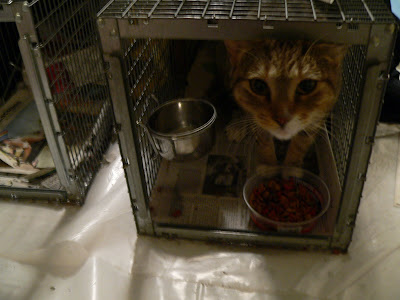 This one, Juno, developed Stockholm Syndrome somewhere along the way. I hear she was actually purring in her cage. This might have been because she was fixing to have kittens in there. It's sad, the choice Anne made for her, but Anne tells me there were over 20 homeless cats at the mobile clinic, all beautiful, some kittens, and the world does not need more kittens. I happen to agree with that. We have three cats living in this house and sometimes that is too much for me. Not to mention the tribe outside.

So, in the world of feline abortion, Juno does not have the right to choose. Humans choose for her. It's tough being a cat. But she seems cool with it, if a little hormonally confused. Now she won't starve, trying to feed little ones.

She didn't want to come out of her cage. Safe, private, with a maid to come and clean it every day, twice a day food--she wants back in! Sorry, Juno. This hotel room won't last. I hope you cleaned out the minibar. 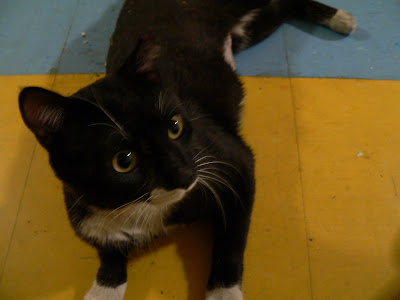 And this guy, I couldn't believe all the yelling! Enough already! Pablo, they call him, but they should have called him Pavarotti. They were planning to put him outside the evening of his trip to the clinic, but turns out he was already missing one of his balls. The doctor had to look around inside his abdomen for it. So he had a little more recovery time than expected. 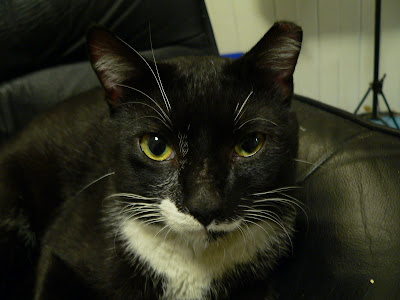 My benefactors let them out in the basement because the traps had to go back to Neighborhood Cats. So they had their last day of recovery living like normal indoor cats. They were friendly enough to handle it, probably not quite feral to begin with. I didn't get to hang out with them--can you believe they kept us separate? Something about spreading disease, or whatever, one of those things people care so much about. 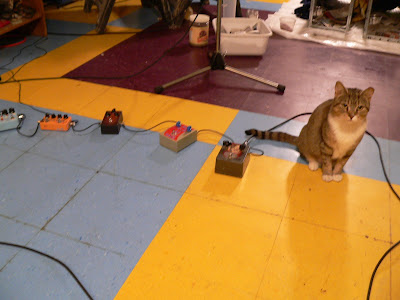 But even Juno ventured away from her cage, disguising herself as a guitar pedal. She got to like the basement a little too much, if you ask me. When they moved her out into the yard, she just sat on the back porch meowing. So that's it? You're done with me now? I thought you loved me!

Yeah, we have a pretty good thing happening in here. I get to sleep in a bed, and play with my sister, and cuddle with the dog. There just isn't enough room for everyone.
Posted by Anne Elliott at 6:08 PM 2 comments:

Young Lions, Younger Lions, and other Rites of Spring 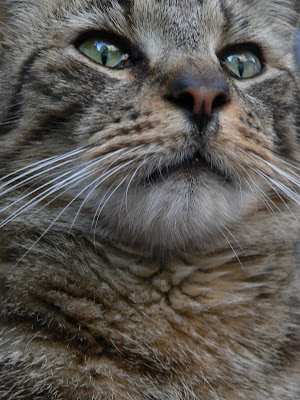 Doesn't Vince make a nice stoop lion? As regal as the dudes in front of the NY Public Library, where I had the good fortune this week to be present to watch my net-friend Ron Currie win this year's Young Lions Fiction Award. I could not have been happier to hear his name called. If you haven't read GOD IS DEAD, check it out, it's one of the most original works I've ever seen, in any year, and captures well the human need for God, which according to some theology, might actually be God. A lot to talk about at your book club. Congrats Ron!

It's been an eventful week. As you know, our feral cat colony has two newcomers. As of today, they have both been captured (yay!) and are in the chilling out phase in our basement. Here they are in their traps. They will live in them for a week: two days before surgery, and two days after surgery. 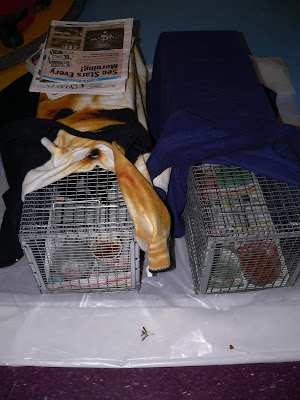 Here's Pablo. (They do have eyes, they just close them when the flash goes off.) He has proven to be talkative and might be friendly enough to adopt, as soon as his pee stops smelling like tomcat. Anyone interested? He has a very expressive vocal range. My husband has been recording him. 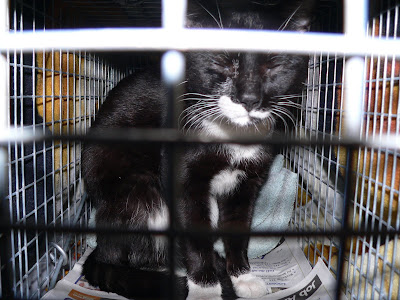 Here's Juno. She is quiet, ravenous, and appears to be pregnant. I doubt she will become adoptable but you never know. Let me know if she appeals to you. She could do well in a quiet home. 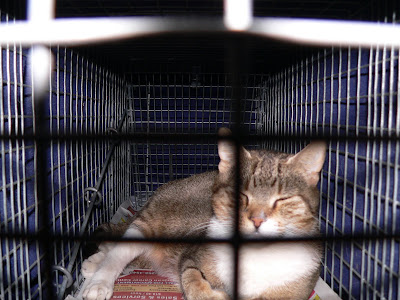 And finally, I just need to celebrate: this year I managed to walk through Brooklyn Botanic Garden on the optimal weekend. Last weekend in April, for future reference, that seems to be the one. Lilacs, tulips, magnolia, and of course, cherry blossom. Enjoy! 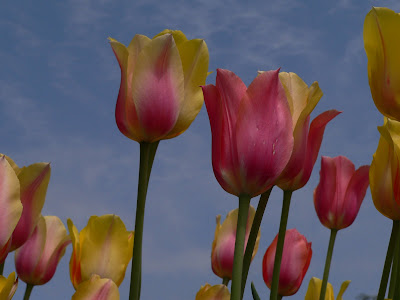 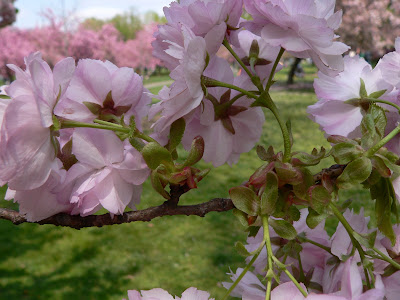