Ever wish you could take a workshop with Faulkner? Check out this free resource. Listen in on a writing class from 1957.
Posted by Anne Elliott at 6:36 PM No comments:

This year Bread Loaf posted some of its readings very quickly on podcast. Free and no mosquito bites! Jim Shepard's fiction reading is worth a listen. Click here to go to iTunes U, then click on Summer 2010: Lectures & Readings to get to the content.
Posted by Anne Elliott at 4:38 PM No comments:

Life Before Language--and After, and During

What emotions does a human being feel on the discovery that things have names? How did Shakespeare come up with new words and expressions (madcap? eyesore? dead as a doornail?) that feel like they always existed? Is language required to think about thinking? How do humans develop language in a vacuum of language? Why do I always cry when I listen to Radiolab?
Tune in and join the sobfest...
Posted by Anne Elliott at 7:24 PM No comments:

Judging a Book by the Evolution of Its Cover

I found this article and slideshow from WSJ interesting, about the evolution of a book cover for a bestseller. I see this book everywhere I look now. Wild to think it almost didn't look like that. I haven't read the book, so I won't comment on its guts. But the final version of the cover is my favorite. Also the one that was "too Scandinavian."
Posted by Anne Elliott at 6:19 PM 12 comments:

A Memoir is Not a Shoutout

Catching up on my podcasts. I don't write much memoir, but I enjoy a peek under the hood, since fiction is not all that different. I like what Stephen Elliott (no relation, but I like how he spells his name) has to say, and the plain way he says it, on the Pen on Fire podcast. Free writing lesson! He talks about not-knowing, which we writers love to talk about, and editing characters out for the sake of narrative, since a memoir is "not a shoutout." Enjoy and be inspired.
Posted by Anne Elliott at 10:07 PM 2 comments: 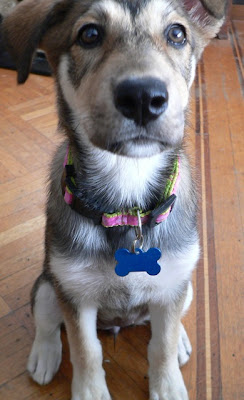 I'm not a cuteness blog, but this can't be stopped.

Two younguns have joined our household recently. Above is Grace, who is now about 11 weeks old. The vet guesses she'll grow to 50 pounds or so.

And the sleeping view: 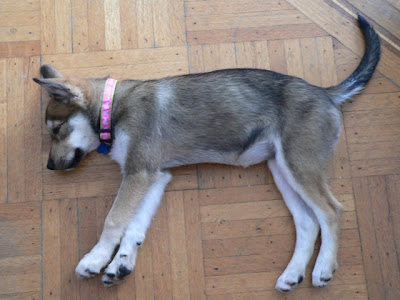 We've never had a puppy this age before, and it's an education.

And below is her brother, Antonio, who we adopted last fall. He's about a year old now. 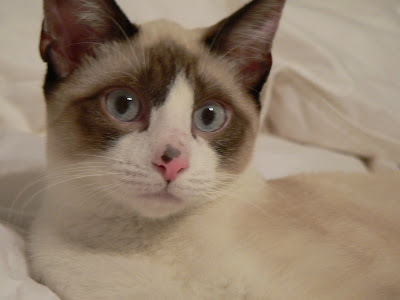 ...says the guy with the lapdog. Oh, and women can sort of write too. But who can read? Enjoy Gary Shteyngart's new book trailer:

Posted by Anne Elliott at 12:04 AM No comments:

This conversation between Jonathan Lethem and Patti Smith is a real treat. Watch as they discuss paving the way for the next generation; the "adolescent quarantine" of coolness and learning to broaden the scope; building a writer's discipline while raising a family; collecting powerful objects and taking care of them during one's lifetime; walking with Walt Whitman. Plus a song by Patti, a tribute to William Blake and his years of working in obscurity. Gives me the gumption to get my ass to work. The interview is a great complement to the writings of each, particularly Smith's recent memoir, JUST KIDS.

Posted by Anne Elliott at 5:29 PM No comments:

I decided to test a different audio host with streaming. Below is a poem/music collaboration I did with my sweetheart, James Barr, a couple years ago. Let's see how this widget works out! If it holds up OK (the last one didn't), I'll start adding tracks.

(Opinions welcome on both the widget and the audio piece.)

Go To FileFactory.com
Posted by Anne Elliott at 10:33 PM No comments:

How Not to How To

Kudos to Richard Bausch for holding the line. In the new world of reading, where aspiring writers are primarily a sales demographic, it's tempting to participate in the game in order to make a paycheck. Check out his article in The Atlantic, How to Write in 700 Easy Lessons, in which he reminds us that the last thing fiction writers need to read is formulaic prescription books.

Sounds like he received a lesson himself, on the length some publishers will go to protect their cash cow, the "how to write" genre. How long until the "how to write" section in the bookstore gets bigger than the literature section?
Posted by Anne Elliott at 10:06 PM No comments:

I’ve been in blog hibernation too long. Blame Facebook, blame my day job, blame TV, blame my novel, blame my need to walk around and do nothing, blame it all. I've decided to try updating the blog again for awhile, primarily links to other things I find interesting.

Salon.com smart lady Laura Miller takes on the topic of the day, self-publishing. She nails it:

What happens once the self-publishing revolution really gets going, when all of those previously rejected manuscripts hit the marketplace, en masse, in print and e-book form, swelling the ranks of 99-cent Kindle and iBook offerings by the millions? Is the public prepared to meet the slush pile? …You've either experienced slush or you haven't, and the difference is not trivial.

I have read slush. I have been slush. Slush has its purpose.

We emerging fiction writers are not know for our self-restraint. The hardest thing for us to learn is how to tell if a project is finished, since the nature of writing is that revision is an infinite possibility. How do thoughtful and serious writers deal with the infinite? With arbitrary cutoff dates, with addiction to workshopping, with rulebooks of various sorts, with editor rejections. We feed on feedback. We’re insatiable. Workshop is a verb.

We feel special for having finished a novel, then we learn that everyone in the world has finished a novel, then we learn that we never did finish one ourselves, or that this pack of pages is more mess than novel, and we use it for kindling, and we quit for awhile and watch HBO. Then we get the itch and go back to the desk and write another novel. Somewhere in the process someone says yes, someone with the power to publish. But I rely on the chorus of nos to keep my feet on the ground and teach me patience. The older I get, the more grateful I am for the rejections. I would hate for them all to disappear.

Thanks, Mary Akers, for the link.
Posted by Anne Elliott at 8:00 PM 3 comments:

I'm Reading This Thursday at KGB

Allen Warnock & Andrea Alton as Carl & Shelly
Andrea Alton is a New York based, actor/writer/comedian. She recently finished a commercial run of Carl & Shelly, Best Friends Forever (co-writer/actor with Allen Warnock) which originally premiered at the 2008 NY Fringe Festival. Other favorite theatre credits include The Chiselers and Labor Day Weekend (Emerging Artists Theatre), The Strangest Kind of Romance (Provincetown Tennessee Williams Theatre Festival), Big Girl, Little World (NY Fringe Festival) and Reckless, She Stoops to Conquer (Kaleidoscope Theatre Company). Andrea performs characters and sketch through out the city and most recently took part in the Miss Fag Pageant at Comix as Miss Park Slope which was a benefit for the Harvey Milk School. www.andreaalton.com.

Allen Warnock: Theatre credits include: The Skin of Our Teeth, A Servant of Two Masters, and WASP (Williamstown Theatre Festival), Off-White Christmas (Manhattan Theatre Source) and Zen and the Art of Doing Nothing (Center Stage, Midtown Int. Theatre Fest '08). Allen co-wrote and appeared in Carl & Shelly, Best Friends Forever which premiered at the '08 NY Fringe Fest and later received a commercial run at Theatre 3 this past February. Film credits: Morning Glory(with Harrison Ford and Diane Keaton, upcoming) and The Wedding Bros. (with Dan Fogler). www.myspace.com/allenwarren.

Anne Elliott Anne Elliott's stories have appeared in Hobart, Pindeldyboz, Opium, FRiGG, 3:AM, and other indie litmags, including the late, great WV. She hails from the Pacific Northwest, and resides now in Brooklyn, where her hobbies include gardening and feral cat management. She has an MFA in visual / performance art from UC San Diego. http://assbackwords.blogspot.com/

Jacob M. Appel Jacob M. Appel's short fiction has appeared in more than 120 leading literary journals. His prose has won the Boston Review Short Fiction Competition, the William Faulkner-William Wisdom Award for the Short Story, the Dana Award, the Arts & Letters Prize for Fiction, the North American Review's Kurt Vonnegut Prize, and many others. Jacob's stage plays have been performed in New York City, regionally and abroad. Jacob has taught most recently at Brown University in Providence, Rhode Island, and at the Gotham Writers' Workshop in New York City. Jacob holds a B.A. and an M.A. from Brown, an M.A. and an M.Phil. from Columbia, an M.D. from Columbia University's College of Physicians and Surgeons, an M.F.A. from N.Y.U. and a J.D. from Harvard Law School. He also publishes in the field of bioethics He currently practices medicine at the Mount Sinai Hospital in New York City. www.jacobmappel.com
Posted by Anne Elliott at 2:53 PM 2 comments: