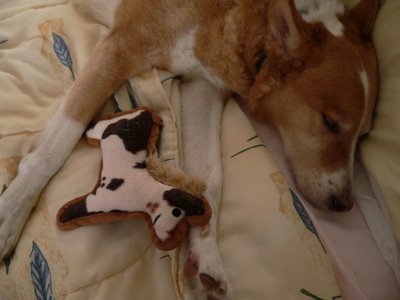 Okay, we have one spoiled doggy here. We took him up to Buffalo for a not-white Christmas with Hubby's family. I don't know if it was the lack of snow that got the dog depressed, or the fact that his hip hurts, which may be arthritis and may be something else, but all he wanted to do was sleep on Grandma's bed. Which he's not allowed to do, but we left on a day trip to Toronto, and the dog took liberties.

Here's a piece of Toronto, by the way, shot near the very diverse Kensington Market. I had never been there before and I absolutely loved it. Hubby says we can move there if another Bush gets elected in '08. Then we got caught in a bad traffic jam and we started to rethink that plan. 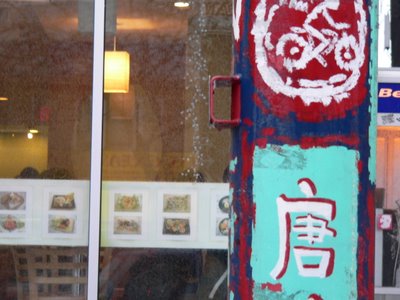 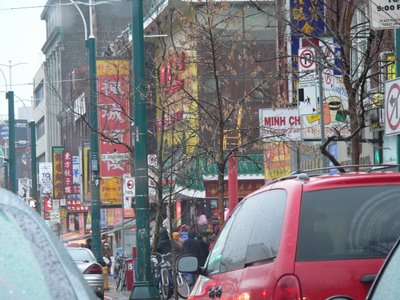 Christmas was quiet, except the present part, which got the dog wound up. I tried to tell him that Christmas was about the baby Jesus but he didn't get it. He likes opening gifts, ripping the paper. I wish we had video, it's pretty funny. Here he is in the joyful aftermath. 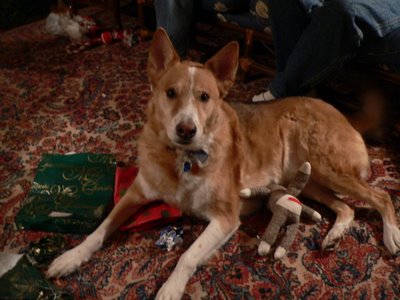 The New Smokelong Quarterly is Live 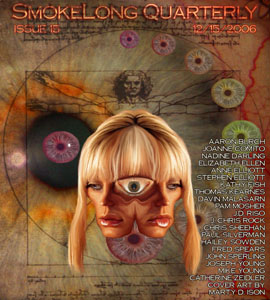 Matt Bell did a great job guest editing this issue. I'm so stoked to be in the company of these rock stars. If you haven't discovered Nadine Darling yet, discover her. There are several contributions from the Michigan/Hobart posse, and even one from Stephen Elliott, who I want to believe is a distant relation of mine, one of the talented ones.
Posted by Anne Elliott at 4:49 PM 4 comments:

Interview in Until Monday--718 in the House!

Hi folks, sorry I haven't been posting much lately. I've been busy reading (Tennessee Williams), writing (fiction), and prepping for the holidays.

The incomparable poet and memoirist Cheryl Burke interviewed me for this interesting publication, Until Monday. It's a Brooklyn guide and more. Check it out! I'm gonna bookmark this site. They have good tips on places off the beaten path where I can go off my diet. Plus profiles on my fellow boroughites, and cool event info.

Hope you are staying sane, dry, and warm. My thoughts go out to my family in the Pacific Northwest, who have been unreachable in the power outage. I trust they are okay, they are hardy, smart, and are probably hunkering down to wait it out.
Posted by Anne Elliott at 7:15 PM 1 comment:

Me With Comedians? I'll Give My Best Shot

I'm reading at PVC next Thursday, come on down! I've decided to leave the ukulele home and do straight poetry. I miss that. Stoked to be reading with friends Gloria and Hal. Thanks, Cheryl, for booking me!

About the Show:PVC is neither an ordinary poetry slam nor a stand-up comedy show. The Poetry Vs. Comedy Variety Show is a battle of wits and rhymes where the stanzas and the stand-up collide. The show is monthly at Galapagos Arts Space in Williamsburg (70 N. 6th St). Produced by writer and literary series curator Cheryl B., PVC boasts a line-up of venerable poets and rising star comedians.