Fell In Love With A Garden This Evening

I was taking a research walk in and around Bellevue Hospital today for scenes in my novel, and happened across a treasure, the Bellevue Sobriety Garden. I had no idea it was there! Nested between a parking lot and the FDR freeway, it's an inspiring example of ingenuity, resourcefulness, and eclectic garden design. Meandering paths and raised beds, all made out of seemingly salvaged/recycled architectural bits, marble chunks, broken ceramic tiles and plates, cement pigs (and other fauna), and very healthy, well-loved plants. If you are ever in the area, visiting one of the hospitals or just wandering through, I urge you to check it out. I had no idea it was maintained by patients, which only makes me love it more. More proof that taking care of gardens is a good way to take care of yourself, too.

The garden was recently at risk of being paved over for parking, but efforts of the community saved it, according to their website.

I'm in love with New York, this week anyway.
Posted by Anne Elliott at 7:52 PM No comments:

Enjoy Astroland While You Can

It's the end of a Brooklyn era. Astroland, the last remaining amusement park at Coney Island, has been bought by developers. This summer is your last chance to see the place as it is, before it turns into a "Vegas style" attraction, complete with luxury condos. When will you go? Will you rock out to the New York Dolls at Sirenfest? Will you dance in the Mermaid Parade? Will you enjoy fireating and swordswallowing at the Freak Show? Will you attend B-films? Will you blush at the Burlesque? Will you (not me) ride the Cyclone? Will you eat raw clams (I will), even on months not ending in R? Bring on the sodium and cholesterol. Bring on the stuffed animals. Bring on the sugar. Bring on the sunburn.

I'm finally getting the hang of some of my camera settings...here are some visuals from my trip there last weekend with visiting friends. I'll let the place speak for itself. 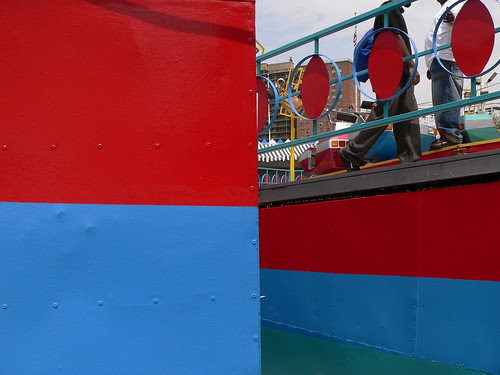 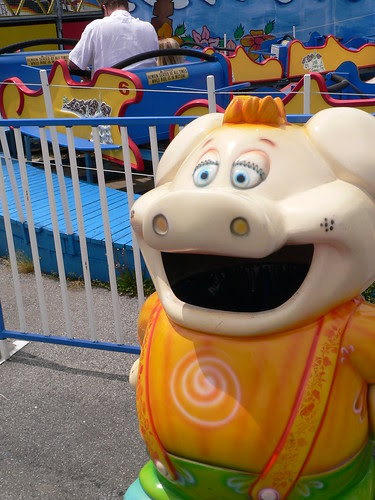 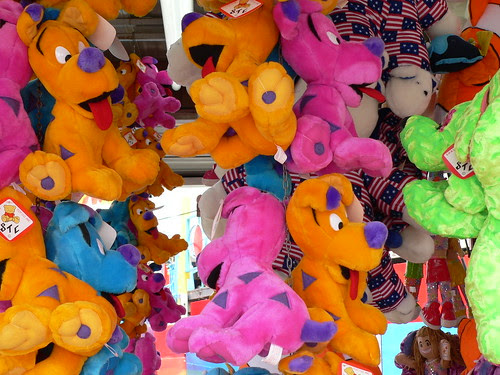 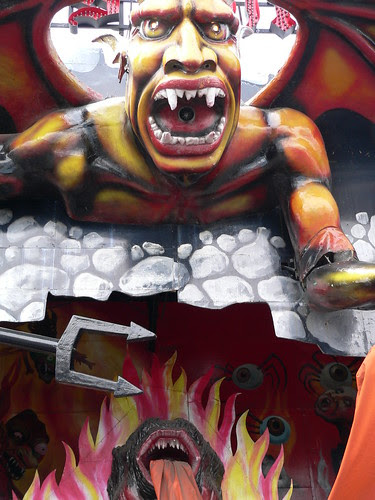 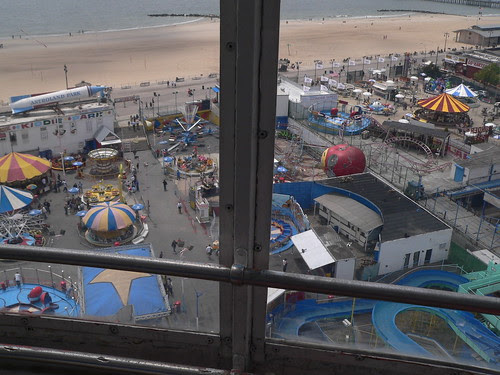 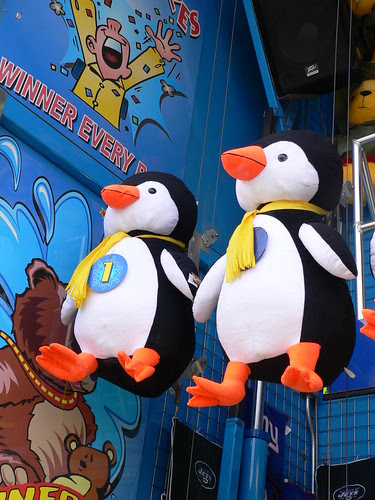 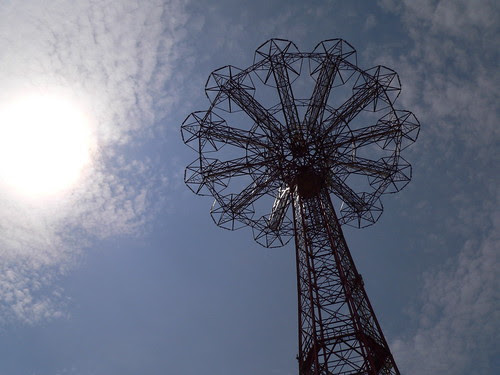 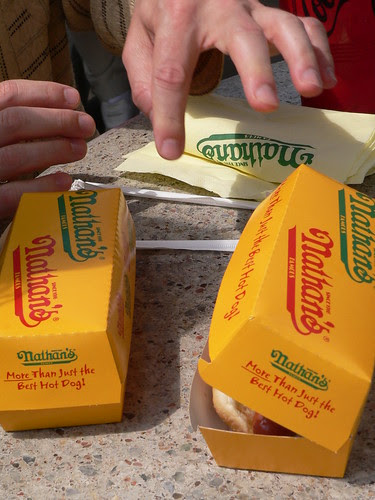 Email ThisBlogThis!Share to TwitterShare to FacebookShare to Pinterest
Labels: brooklyn

Yoga for Us Regular Schlubs in Cars

My longtime pal Gennette has started a business with her yoga-teaching, cancer-surviving friend Jen, designed for regular, busy people who can't bend their body into a pretzel and spend too much time behind the wheel of a car. Believe it or not, it's possible to do yoga while concentrating on the road. It relieves stress, and reduces the pain of long hours sitting still. Stop beeping, and start breathing!

Their first release is designed for traffic jams, but others will follow, for road trips, etc. Just pop in the Om The Road CD and follow the audio directions. Check it out!
Posted by Anne Elliott at 7:04 PM No comments:

Made Me Giggle the 5 Train Today

In her collection of essays/lectures, NEGOTIATING WITH THE DEAD: A WRITER ON WRITING, Margaret Atwood reflects on her black-clad ("like Hamlet--") bohemian poet days in the early 1960's, when the coffee houses had "mandatory Chianti-bottle candleholders." A morsel:

Another thing was--how can I put this? It was borne in on me that some of these people--even the published ones, even the respected ones--weren't very good. Some were wonderful at times, but uneven; others were insufferably mannerist; others were clearly there mostly to pick up women, or men. Could it be that getting through the door into the swarming poetic anthill wasn't necessarily a guarantee of anything? What then was the true Certificate of Approval? How would you ever know whether you'd made the grade or not, and what was the grade, anyway? If some of these people were deluded about their talents--and it was clear they were--was it possible that I might be as well? And come to think of it, what was "good?" And who determined that, and what litmus paper did they use?

Some things don't change. The candleholders, maybe, or the fashions. But we've all felt this at one time are another: that person up there on mic is overstepping her bounds. Am I too? It can be crippling, it can be funny, it can turn you off from poetry forever. Or, you learn to love the earnestness, like I somehow did, and lower your standards, so that you can keep writing. It's a dilemma.

Is the blogosphere the new Chianti-candled coffehouse? Aren't you glad we can wear our pajamas? Do we worry about being "good," or are we just happy to have a free forum? Do we do it for the sheer love of free speech, warts and all? And aren't the warts kind of cool?
Posted by Anne Elliott at 6:41 PM 2 comments:

My old pal and apartmentmate Mike Kroll has a new MySpace page, with lots of songs to listen to, new and old. Check it out! It's nice to hear that soulful voice again, nice to know he's still writing great material. He's a real poet and guitar hero, a songwriter's songwriter.
Posted by Anne Elliott at 8:32 PM No comments:

Another Novel Way to Promote a Novel!

Canadian debut novelist Claire Cameron is doing a truck stop tour for her novel, THE LINE PAINTER. She is listing appearances and reporting back on her blog. Worth a look!
Posted by Anne Elliott at 8:11 PM No comments:

Art That Takes My Breath Away

Such a cliche. But I'm feeling susceptible to other peoples' art and I can't stop blogging about it. Maybe I should follow the lead of (my non-relative) Stephen Elliott who took an internet fast for one month. He learned it helps lengthen the attention span. Might be worth the experiment. If I go on the wagon, I'll warn you. It convinced him to give up blogging entirely.

Anyhoo, in keeping with my "All For the Best" post, I found myself sighing over a picture in the newspaper today of a volunteer who got Adrian Piper's "EVERYTHING WILL BE TAKEN AWAY" hennaed onto his forehead, backwards, so he can read it in the mirror. My colleague at work found it depressing. I suppose it is. But it also, curiously, lightens the load. I pinned the photo up over my desk at work.

Walking through Madison Square Park yesterday evening, I stopped in my tracks to look at the new site-specific work by sculptor Roxy Paine. His stainless steel denuded trees, gleaming in the fading sunlight, interacting with the newly-budding real trees around them--I had to take time to take them in. You can get close to one of them, which already has dog pee making a patina near the base. I'm so jealous. And grateful I got to see it in person. This is what sculpture is supposed to do. I haven't been floored by formalism like this in awhile. If you are in the area, don't miss this stuff. I don't think it's a permanent exhibition. (And you carnivores can eat one of the city's best burgers at the Shack while you're there.)

If you're a Wagner fan (which I am, despite his politics), check out The Tristan Mysteries, Lincoln Center's latest. The video clips here are worth a look. Hold your breath. Sigh.

And if you need to take your breath away with a belly laugh, check out pics of a bear reading Tao Lin's work, courtesy of 3AM magazine. Thank you, Mr. Bear. I only wish I had been there to hear him read.
Posted by Anne Elliott at 7:52 PM No comments:

This One Throws Me into Melancholy and Questions

I rented Godspell as part of my research for the new novel, where I delve into the folk Christianity of the 70's. Boy, I did not expect my reaction. At first I could not stop laughing. How goofy, the hippies painting on their clown faces and roller skating and playing their slide whistles! How fun to see it in the NYC landscape I know well now, these songs I learned backward and forward when I was a kid, a kid who had never seen these big landmarks in person. There's Lincoln Center! There's Central Park! Bethesda Fountain! Look at the angel, immortalized again (and more ironically) in Tony Kushner's Angels in America!

Then I start freaking a little. I mean, it's really goofy, and I realize that I was drawn in by the clown thing when I was little, the white fluffy-headed Jesus with his Superman shirt and pompom shoes and painted-on tears. The language is a little opaque, and I didn't understand it, not really, the way I didn't understand Shakespeare or hymns or the liturgy or even the Gospels I heard weekly in church. (And the songs in Godspell use the words from the Episcopal hymnal...) But the slapstick is what I lived for, back then, that's what I understood: the mime stuff, the happy-hippy feeling. Was this a big part of my religious indoctrination? And if so, what, exactly, did I learn?

For one, I got the basics of the parables. But I couldn't watch them now. Too much clowning, too much overlay. I had to fast-forward through the silly voices and hey-kids-lets-put-on-a-show thing.

And then there's this number, "All For the Best," filmed on Manhattan rooftops, including a finale on the unfinished World Trade Center. I'm feeling vertigo, and sorrow, watching the fast vaudeville-style dancing up there, too close to the edge, and the song's lyric: "don't forget that when you'll get to heaven you'll be blessed."

Did I believe in heaven? Was this part of my kid theology? Do I now? And do you have to die to find it? Or, as I would rather think, is our life on earth so full of possibility that it might just be heaven already?

Just seeing the towers brings flashbacks of my own daily walk through those buildings, fixtures of my landscape for the years I worked downtown, and the day I stood below and watched them burn and fall, watched people fall too. The film uses the towers as a symbol of wealth and what you "can't take with you." The antithesis of heaven. The message, which I did get when I was little: wealth and luck on earth mean nothing. But is that too pat? How has the meaning of this film changed, now that the city has, now that we've lost our happy-hippy innocence? Or our Wall Street business-as-usual innocence?

Does this mean I shouldn't be grateful for my good luck? My wealth, relatively speaking, in the global scheme of things? It does bring home one thing--it's all fragile. Jobs, things, and people come and go. What can I hang onto? Should I even try?

Or, is that what makes it heaven, life here? That it is fragile? Is heaven allowed to be fragile?

I rented Jesus Christ Superstar too, which was a much better fit for my current state of mind. Judas is the guy I identify with. The one who resists the groupthink. It's not enough to just follow and trust. You have to think about what you're doing, independently, even if doubt is a part of that process.
Posted by Anne Elliott at 9:08 PM 14 comments: