Cat Hospice, and Other Developments 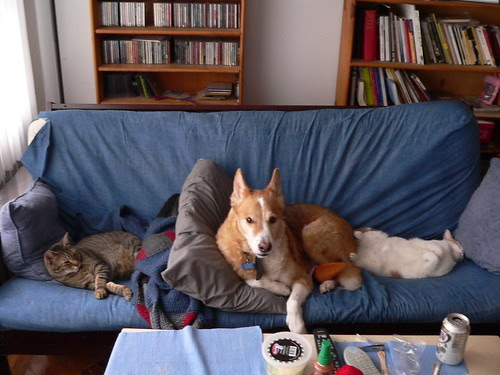 About time I filled you in on the pets, indoor and out. 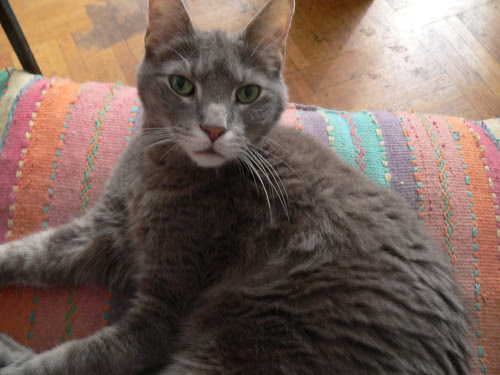 Boo is terminally ill. We don't have a definitive diagnosis. After tons of blood tests, a sonogram, and an experimental treatment with steroids, we have decided to let him just live out his life without further intervention. We're continuing the steroids to help him keep what appetite he has left. The vet thinks it is probably some kind of cancer, but we can't know more without putting him under the knife, and we've decided to go with palliative care instead. This guy used to be a big fat pig, 18-pounder. Now he's barely 11 pounds, skin and bones. He walks around in a fog, takes a long time to decide to jump into the chair or take a bit of food. We're going to miss him, but have decided not to torture him any more with procedures he doesn't understand, procedures that would probably only lead to a dire diagnosis anyway. 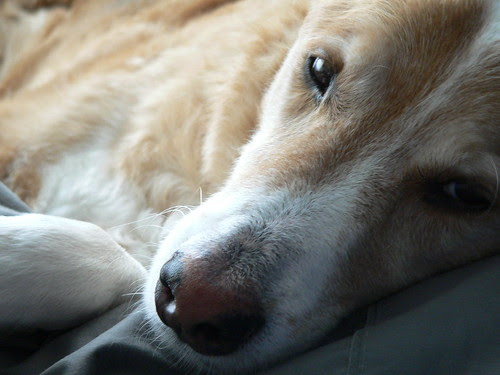 Willie is turning into an old man hypochondriac. We just got his teeth cleaned. They are in great shape, no extractions, not bad for a 10-year old! So what if he has gray hair! I think it looks handsome on him. Quit, moping, Silver Fox! 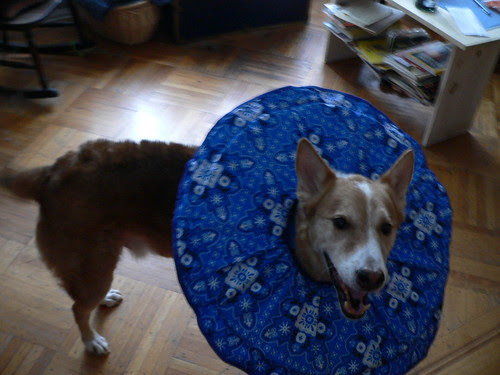 He got a little razor burn from the day of dental(blood pressure cuff on his tail) and he decided to make a mountain out of a molehill, spent a day licking himself sore, unsupervised. So he had to wear his punitive e-collar for a week. Doesn't it look cute on him?

Meanwhile, we are feeding Boo whenever he indicates he might eat, which means the other cats are stealing and getting downright beefy. Angus is wearing the weight well, like a wrestler. But look at Ava! She's a marshmallow! 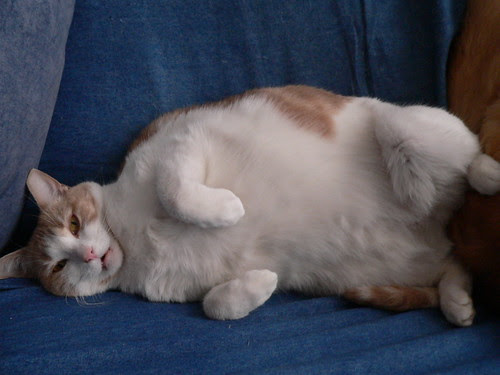 Our outdoor colony is down to 5 cats again. We are not sure what happened to the favored Pablo. Probably he got driven away by the diehards here. We heard some fighting one night and the next day he was gone. Meanwhile, Juno (and I WISH I had photos of this) moved around the corner and became the doorman at an apartment building. She went from shy to I-love-everybody. She just hung out under the awning and waited for people to come out and give her the love and food she deserves. I have no doubts that she has a new name now and a new indoor home. Go Juno!

Vince, Marcel, Rrose, Elvis, and Elvis are all doing the usual, the morning food choir, the afternoon lolling in the sun, the offerings of dead mice and birds all over our yard.
Posted by Anne Elliott at 6:29 PM 3 comments:

Do your writer self a favor and listen in. He talks about self-consciousness and the damage it does to art--a message this insecure, inexperienced writer needs to hear over and over and over. Also covers how it feels to be one of two Andre Dubuses in the literary world, and how he arrives at honesty in his fiction. He talks about his method of research (interview people about their jobs, etc., but not about how they feel--thats the writer's job), and how he gets unstuck (patience, waiting). And of course, my favorite topic: trusting intuition. In his words: "The horse knows the way."

As usual, Barbara coaxes the good stuff out of her guest. Brava!
Posted by Anne Elliott at 6:54 PM 1 comment: