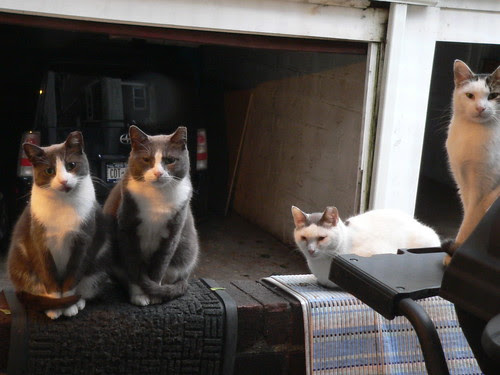 I apologize for not keeping you posted on our outdoor cat situation. We still have five. Four are represented here, demanding breakfast. From the left: Rrose, her brother Marcel, and her children, Elvis Memphis and Elvis Vegas. Their brother, Elvis Hollywood, succumbed to a car. Their cousin (we think?) Junior disappeared. Vince, the patriarch, was too close to the camera to photograph this morning. He breaks into the house on a regular basis.

Rrose is getting tamer, and fatter! We aren't trying to touch her, which helps in the trust department. She has decided she likes us, and will now pose for photos in exchange for food. Isn't she beautiful? Look how she cocks her head!

Never mind that they all piss all over the place and irritate the neighbors. Pawprints all over the cars. Garages that stink. Yes, we MADE these cats exist by feeding them! It's a weird existential question. None of them are adoptable, they never will be, no matter how friendly they get, unless you like cat pee in your house. We are learning this with Angus, Vince's littermate, the one we brought inside. Unfortunately, he's way too cute to banish.

But Rrose, I have a special place for her in my heart. Poor thing was skinny and perpetually pregnant, until we got her spayed and eartipped. She's the most timid. She's also the most susceptible to catnip. I love watching her get fat and courageous.

And the kids? The white Elvii? Their dad, a neighbor cat named Yves, is AWOL. Deadbeat. But Marcel was a good uncle. He taught these nephews to hunt and beg like pros. They all huddle in a pile for warmth in the winter. Which is just around the corner.
Posted by Anne Elliott at 8:20 PM 2 comments:

Email ThisBlogThis!Share to TwitterShare to FacebookShare to Pinterest
Labels: FeralCats

I entered Opium Magazine's 500-Word Memoir contest and managed to make the short list! I may not have a book-length memoir in me, but I could manage 450 words. I just wanted to support Opium, with my last-minute entry, since I have benefited from their terrific parties in the past. And now, not only this needed shot in the arm, but my net-friend Clifford Garstang is on the list too. Congrats, Cliff!

My story is about the 1972 Republican convention. I started it in Lynda Barry's class, on the assignment to list ten American presidents. So now you know it's not fiction. Yes, I really did shout, "Four more years!" I was caught up in the moment. I was also in first grade.

My politics have changed. My brother's too. For the better, I hope.

Your Own Brand of Sumo

Near the end of Robert Olen Butler's FROM WHERE YOU DREAM: THE PROCESS OF WRITING FICTION, he tells his workshop students:

...when sumo wrestlers are interviewed, they always say the same thing--they barely move their lips--no matter what they're asked, it all boils down to 'I'm going to do my brand of sumo, and I'm going to do my best.' That's it, folks. That's the lesson of the universe.

This, to me, was the book's only big piece of "universal" writing advice; the rest of it focuses on Butler's particular brand of sumo, which (as the subtitle promises) is more about process than analysis, more about heart than head.

Butler's argument, distilled from lectures by editor Janet Burroway, is that fiction can only begin to work if it is coming from the author's unconscious, or "white-hot center." Toward that end, he gives his own method of accessing the unconscious, which involves finding the emotional center of an event--the yearning--then, without naming emotions, exploring concrete sensual details, with a filmic eye.

He shares his own process, even more specifically, outlining his index card methodology. His first step in writing a novel is to sit and daydream out the scenes, without writing them, then jot the basics of each scene on a notecard. Then he plays with the order of the cards, dreams new scenes as necessary. Then he writes the scenes, always in order.

You know me, I always love a peek under the hood. I'm a process junkie, and it's helpful to find more tools for the box. His approach is like method acting: story driven by moment-to-moment motivations, use of sense memory. But, I believe (like many actors have told me), the Method is potentially dangerous if turned into a religion.

The first two sections of the book are, like the good parts of religion, invigorating and inspiring. The first, "The Lectures," gives the basic foundation of Butler's approach to fiction, the writer's "trance" to access the unconscious, the "composting" of concrete memory for future stories. (He suggests journaling in concrete images, not analytic narrative, and you know I love that.) And the second section, "The Workshop," is transcripts of his interaction with students, in which he literally pulls sense details out of them, and stops them when they analyze. It reminds me of Sandy Meisner's book for actors, the next best thing to being in a class. (And by the way, writers can benefit from Meisner's book too.)

But the third section of Butler's book is where the religion-of-the-dreamstate turns dangerous, in my view. It contains full text of three early-draft student stories, followed by Butler's in-class analysis of them. And he judges the stories on whether or not they appear to come from the unconscious. (Like an acting teacher's judgment of "indicating" vs. "living" emotion, if you will.) He encourages students to find moments of "harmonic resonance" in peer work, where they "thrum" with the characters. On the one hand, this is refreshing as hell--you mean we don't have to analyze the POV and rising action crap? And I must admit, in my own work, I've found the most helpful critiques are often simply "I'm feeling _____ now," jotted in the margins of the manuscript.

But writers are not actors. They are not the medium for the finished work. We get the privilege of stepping away and letting the work have a life of its own. Butler the teacher-critic pronounces judgments like this: Story A was written from the analytic mind (GONG!), Story B was written from the unconscious (DING! DING! DING!). And while I agree with his assessment of the success/nonsuccess of these three stories, I find it presumptuous to guess at the writer's state of mind during composition, or to judge the purity of one thinking process over another.

Barbara DeMarco-Barrett, on her awesome radio show, often asks her guests questions like, "Do you write your sentences over and over, or do they just come out that way?" (I paraphrase, apologies.) More often, the guest claims to bang on the work until they get it right. I would argue that the presence or absence of the writer's dreamstate is not necessarily evident in the results. For many writers I admire, it's more trial and error than flow (what Butler calls being in "The Zone").

So my wishy washy recommendation is read this book for the tools and inspiration (inspired about 30 pages out of me! Thanks ROB!), but try not to drink the Kool-Aid. It could be a recipe for writer's block and/or quitting altogether. Sometimes battling with a problematic story is worth it. Sometimes early readers find cool emotions in the work that you didn't feel or intend, and this is a raw material you have authored that you can work with. It's okay to make your own clay. It may take longer, being a "draft writer," as Butler puts it, but so be it. The Annie Lamott-esque "shitty first drafts" need not be composted.

What do you guys think? Can you fake the soul of a story with technique, and if so, is the story any less genuine? Can you make readers "thrum" without "thrumming" yourself? Or, is finding your resonant subject matter the main battle, and the technique thing secondary? Anyone else have a response to this book?
Posted by Anne Elliott at 6:47 PM 2 comments:

My Brother Gives Some Fatherly Advice

My brother was visiting friends and they said, hey, you wanna help us enter this contest? So they put him in front of the camera. I got a good laugh. Check it out! Vote too.
Posted by Anne Elliott at 10:19 PM 1 comment:

Email ThisBlogThis!Share to TwitterShare to FacebookShare to Pinterest
Labels: actors

Well, folks, you've seen the news about our very own Brooklyn tornado! I think we should call it a Brooklyn cyclone, but that's just me. Our dog Willie woke us up in extreme consternation at about 4:30 AM, crying and trying to sit on our heads. We didn't get it. We didn't hear any thunderstorm. YET.

The storm bypassed our neighborhood, save some minor flooding, so I walked the dog and went to work, like a normal day. But my train wasn't running. So I took a bus to another train. Then another. No go. Overheard people talking about a tornado, but didn't think much of it until I got home, and saw the mess on TV. Our mayor reminded us that people in the Midwest deal with this all the time, with much more damage and injuries. We were lucky.

Except for the fact that we rely on mass transit. I telecommuted, and had a surprisingly productive workday, with one traumatized doggy at my feet. So I don't have any exciting NY stories to tell. I feel for the people dealing with their auto and homeowners insurance now.
Posted by Anne Elliott at 10:02 PM No comments:

Email ThisBlogThis!Share to TwitterShare to FacebookShare to Pinterest
Labels: brooklyn

Yay! I just wrote word number 70,549 on my new novel, ALMA. It's getting there. I'm in the penultimate chapters now! Conflict coming to a head! Haunting memories facing my heroine! Family members attempting to communicate and failing miserably! But loving each other nonetheless! More exclamation points! I'm putting them here so I'm not tempted to put them in the novel!