Last year I had fun writing mini book reviews from memory, so I'll make it an annual tradition. Here's what stuck with me in my 2008 reading:

Every centimeter of Lynda Barry's WHAT IT IS is covered with full color collage, drawing, and writing, including the endpapers. Monkeys, birds, cats, monsters, found postcards with old person handwriting, yellow legal paper, and pattern. I took it all in. I read it in bed and it fed my dreams. This book instructs on Barry's creative method, passing the art baton to us all.

Believe the hype about David Wroblewski's THE STORY OF EDGAR SAWTELLE. The prose has a courageously slow pace, yet the action is riveting. The dogs are real characters, echoing Shakespeare, but never stop being dogs, a rarity in fiction. The conflict is biblical. And Wroblewski used to be a computer programmer who wrote by night, so he's automatically cool to me. Did he quit his day job? I don't know, but the Oprah sticker indicates he probably should.

Ed Park's PERSONAL DAYS is the workplace novel I wish I'd written. Told in titled fragments, sometimes in first person plural, it has the rhythm of a real office on the verge of shutting down. Characters make their own language and amusement even as they panic about their imminent firings. Corporatespeak starts off funny, then becomes eerily poignant. The book is compact; its ideas are huge. And it made me laugh aloud on the subway more than once.

You may already know I'm fascinated with stories of the formerly-religious. I heard Shalom Auslander in an interview suggest bookstores should create a table: "Literature of the Fallen." Ha! We have a genre! I immediately grabbed FORESKIN'S LAMENT, his hilarious memoir. I was surprised to learn that he didn't stop believing in God, but rather, stopped liking him. His God is the vengeful Old Testament version, who hurts his loved ones out of spite. Like if Auslander carries money on the Sabbath, the New York Rangers lose. He's known for his humor, but it's rooted in real trauma, and I surprised myself by crying as I read the heartbreaking end.

And speaking of the Literature of the Fallen, James Wood's THE BOOK AGAINST GOD stayed with me too. This is a PK (preacher's kid) novel rooted in the Anglican tradition of questioning faith. The protag is not likeable--a bad husband, he doesn't finish things, and he speaks embarrasingly in public. Yet this one moved me to tears also, when I realized in a rush that everyone around the protag was playing a role in his noneffectiveness, shushing him and pooh-pooing his atheism. Woods speaks in his critical work of the "unreliably unreliable" narrator, and this book has a prime example, when the untrustworthy protag acknowledges the truth (and conflict) that everyone else refuses to face. It disarmed me completely.
Posted by Anne Elliott at 9:00 PM 6 comments:

If You Can't Afford Bread Loaf

If you can't afford Bread Loaf Writer's Conference (or like me, you simply can't get in), here's the good news--they are now podcasting. It's free. Who will you listen to first? I'm thinking James Longenbach, who taught me in a half hour lecture at last year's AWP how to love John Ashbery's line breaks. I'm off to begin downloading.
Posted by Anne Elliott at 12:40 AM 1 comment: 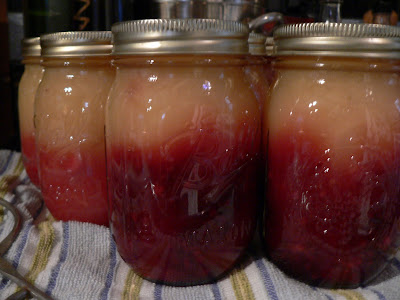 I made apple-blackberry (right) and apple-cranberry (left) sauce today. I never tried canning before, but it was fun! Can you believe this projaholic never went there? I followed directions as best I could from a Sunset book I had laying around from the 1970s. 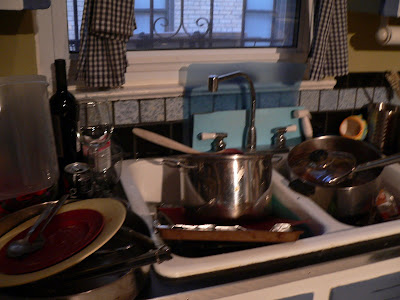