Woke Up with a Wicked Backache 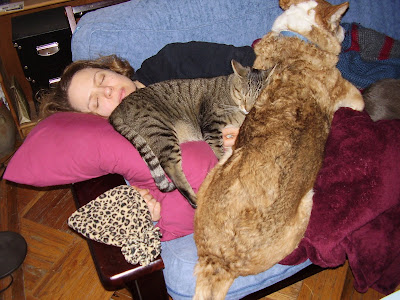 I swear, I didn't stage this. 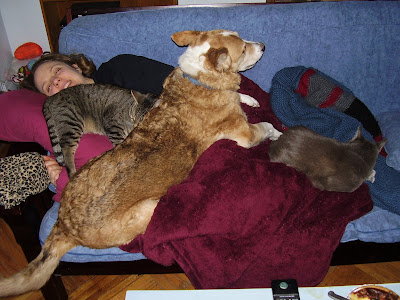 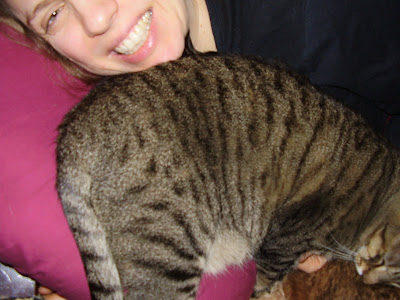 One More Reason to Love Dogs

Our dog isn't trained in CPR, or the Heimlich maneuver, but I hope he'd be able to think on his feet like this one.

Go Toby!
Posted by Anne Elliott at 6:47 PM No comments:

This Music is The Schnitzel

My handsome-musician-husband has introduced me to an interesting alternapop musician from Stuttgart, Putte. A beautiful MySpace page, and the songwriting is topnotch. Give it a listen! This stuff makes me feel good.

"Music makes me love people, and people make me love music." I couldn't say it better.
Posted by Anne Elliott at 7:35 PM 5 comments:

Email ThisBlogThis!Share to TwitterShare to FacebookShare to Pinterest
Labels: music

OK, so if spring won't stick outside, at least I can spring clean my blog. The new colors are in deference to those of you who wear glasses. Sorry, I couldn't bring myself to use a white background. If y'all demand it, I will. Seems to be the way things are going out there in webland.

Also not to be missed, links to podcasts: Writers on Writing, This American Life (now free!), Bat Segundo, and Everything Acting, in addition to the ones I had.

Hope you enjoy. Complain and compliment as necessary.
Posted by Anne Elliott at 7:17 PM 1 comment:

Careful, you may find this shocking. Not for the faint of heart.

They don't like us. They like our food, but not us.
Posted by Anne Elliott at 7:07 PM No comments:

Email ThisBlogThis!Share to TwitterShare to FacebookShare to Pinterest
Labels: FeralCats

Here's to My Talented Friends...Let's Go!

There's no way I'll make all of these events, but I'll try. Spring is busting out.

And National Poetry Month hasn't even started yet!

Via Learn Out Loud, I happened upon this series of forums from Grace Episcopal Cathedral in San Francisco today. I found this conversation with postmodern theologian Matthew Fox well worth the listen. The topic is creativity as a marker of our humanity, and the power of creativity to heal communities. In his words (complete with charming Midwestern accent):

It's part of the internalized oppression of a culture, that people go around saying, "I'm not creative. I'm not creative." And then we project our creativity onto stars...

Puts me in the mind of Lynda Barry, who says we've been told to leave singing and drawing and writing "to the professionals." Both of these people challenge us to see our creative endeavors as something we do for the sake of our own mental health or for the sake of the community, not for the sake of Art or Career. Fox, in addition, challenges us to meditate on the creative areas of our lives that may not be so obvious: keeping a home, for example, or raising kids.

It's a resurrection story. Who's going to roll away that stone? Those stones inside of us--stones of self-doubt, stones of fear, stones of attachment.

How does this Christian imagery sit with you all? It produces mixed feelings in me, usually, but here it makes some sense. The language is familiar. I like the way he makes clear he is speaking in metaphor, that it is a religious framework for a more humanist spiritual discussion. I like the idea of exploring religious metaphor and language, without necessarily needing to "join up" or "believe." (And Fox reminds us of the chilling relationship between fascism and Christianity....) Responses?

I think I might listen to Anne Lamott next.
Posted by Anne Elliott at 6:12 PM 3 comments:

And Speaking of Snobbery (Mine Too)

Via Ed Champion again, Jennifer Weiner responds to those who claim genre fiction is inferior:

Doesn’t it mean that the Apocalypse is coming if their gaze wavers for even an instant from the MFA-holding, quarterly-publishing, Park-Slope-dwelling literary wonders of the moment to discuss the books that the “less-educated basic readers” actually read, discuss and enjoy?

I love the way Weiner champions genre fiction, not just on her blog, but in the press, and consistently. Her argument: people who declaim chick lit are just misogynists in drag. She makes me want to like chick lit, on principle. I wanna be of the people, maybe. Today, anyway.
Posted by Anne Elliott at 6:16 PM 1 comment:

My friend Janice has her paperback for Girlbomb: A Halfway Homeless Memoir coming out next week. And here's the trailer! Congrats, Janice, on both.

I recommended the memoir highly last year when the hardback came out, and I still do. It's about an adolescence spent in and out of teen shelters in NYC. Janice's voice is crisp and funny, and she has a keen sense of pacing. It's a portrait of an era, a place, and a quirky, interesting individual coming into her own.

What is "home?" Where can a girl feel safe? What are nuns really like? Read and learn.
Posted by Anne Elliott at 9:17 PM 5 comments:

While We're on the Subject of the "And Then"

Or plot, if you're still calling it that... a couple more opinions from the field.

1.
Ed Champion's interview with Heidi Julavits on the Bat Segundo Show is worth a listen. He asks her view on “closure.” She says genre fiction operates on the “what happened” level, and when you find out what happened, “you don’t really have any more curiosity about it.” It’s “all about information.”

But she argues you can have informational closure without intellectual and emotional closure. She likes this kind of ambiguity. “I’ve run up against a lot of cultural resistance to ambiguity,” she says. She talks about book reviewers too: “They hate books with 'style.' That’s the new thing.”

And Ed Champion, he dishes out confrontational questions, as usual, like “How much ambiguity is too much?” and, “What steps do you take to justify ambiguity?”

I won’t transcribe it, but do listen. Unless you are uncomfortable listening to confrontational questions. Does ambiguity require justification in fiction? You decide.

2.
Check out David Denby's essay, "The New Disorder," in the recent New Yorker. The subject is fractured/nonlinear storytelling in film, from "Pulp Fiction" to "Memento" to "Babel" to much older precedents in print and on the stage. I was cracking up at this, in reference to the most recent crop:

Trying to jolt, yes! I disagree on the notion of attempted novelty. Most artists have made their peace with the originality issue. But bigger question--does the jolt succeed in giving understanding, new or not? Some of Denby's conclusion rings true to me--he recognizes these approaches as legitimate play, with noble goals. But when the work becomes a "closed form," or "puzzle box," "the rich ambivalence of art somehow slips away." Modern audiences have become more tolerant of, even demanding of, this mashup/puzzle paradigm. But does it move them? Is that even the goal?

Anyhoo, I'm not too worried about linear vs. nonlinear storytelling. My issues are about singular/central conflict vs. multiple/scattered conflict. But ambiguity, yes. How do you make it good?

At a writer's conference I went to a couple years ago, an editor polled the crowd: how many preferred a fractured and confusing narrative and how many preferred a clear and linear one? The answer surprised me: it was about half and half. He said that was the response he expected.
Posted by Anne Elliott at 4:54 PM 7 comments: